We’d like to give special thanks and acknowledgement to Grand Master Al Cole, researcher, author and publisher of the website dedicated to the Taekwondo Jidokwan Society, and it’s historical society. Grand Master Al Cole, graciously has allowed us to publish in this site, information collected during his research, investigation and travels to various nations and Korea. Without his valuable groundwork and years of dedication, this page would not be complete.

Kamsa Hamnida!
Thank you very much! 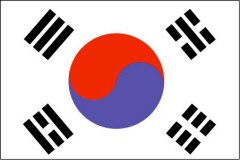 “For myself, for the Kwan, for the country”

Jidokwan is one of the original nine schools or Kwans of the modern Korean martial arts that became Taekwondo, and was founded in what is now South Korea at the end of the Second World War. Its name translates as “School of Wisdom”, “The Way of Wisdom” or “The Right Way”.

The Jidokwan in Korea still exists today and it functions as a social fraternal order. Jidokwan supports and endorses the Kukkiwon methodology of Taekwondo, and supports the WTF.

The President of the Jidokwan, Seung Wan Lee was recently elected as the new Kukkiwon President.

Initiative role for the Kwan Unity

For myself, for the Kwan, for the country, based on these three words, Jidokwan was founded on March 3rd of 1946. The Jidokwan was first titled as Cho Sun Yun Moo Kwan Kong Soo Do Bu. 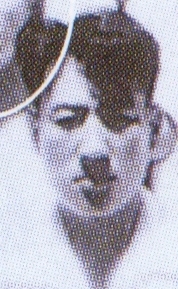 When he was seventeen years old, Chun relocated to Japan to attend College at Dong Yang Chuck Sik (Takushoku) University in Japan, where he mastered Shotokan Karate under Gichin Funakoshi. Upon his return to his native Korea, he began teaching the Karate that he had learned in Japan at the Chosun Yun Moo Kwan school of Judo. This was one of the few martial art schools that the Japanese occupying forces allowed to exist during this period of military occupation. During this time, he had a very close relationship with Byung In Yoon, who studied Chuan-fa in Manchuria and became a Shudokan Karate “Shihan” (Sabum or teacher) under Kanken Tōyama while he studied in Japan.

Chun and Yoon would travel to train with other martial artists, sometimes traveling to Manchuria. They trained with each other so much that they became known as brothers. Yoon taught class at Chun’s Choson Yun Moo Kwan Kong Soo Do Bu for about 6 months before opening his own club called the YMCA Kwon Bop Bu. Yoon’s YMCA club later became the Chang Moo Kwan, which he founded with his most senior student, Nam Suk Lee. 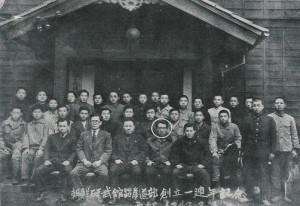 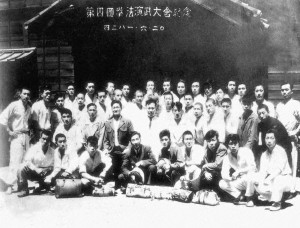 This picture is VERY rare. Almost know one has ever seen this before now. It is a picture of the 4th Kwon Bup Bu Demonstration/Meeting. In the photo are the founder of Jidokwan, Grandmaster CHUN, Sang Sup and YOON, Byung In who later when on to found the Chang Moo Kwan. Seated in the second row in the dark suit is Yoon- Byung-in. To his left is Hwang Kee, founder of Mooduk-kwan. Behind and to the left of Hwang Kee is Lee Byoung-ro (Photo by Kukkiwon) .

The Jidokwan still exist in Korea today and functions only as a fraternal order which endorses the Kukkiwon system and supports the World Taekwondo Federation.

The Spirit of the Eight Manners Jidokwan of Solemnity 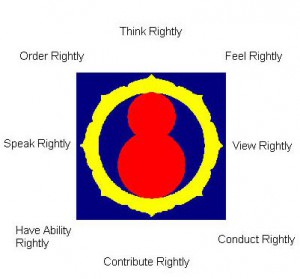 Taekwondo Jidokwan’s philosophy is as follows (as published in the 2006 Jidokwan 60th Anniversary Handbook):

1. A leadership imbued with wisdom and refinement.
2. A courageous activist who thinks before his action.
3. A patriot who is devoted to the welfare of his/her nation.

The objectives of Instructor Education

1. To help maintain self-perfection which is respected by the public.
2. To help form an avant-garde in organizing national force to stop the aggressors.
3. To help achieve ideological innovation in taekwondo spirit.
4. To help actively participate in the service to the public for the community development.
5. To help foster high hopes and great ambition by encouraging savings.

The Spirit of the Eight Manners of Solemnity

1. I will observe the rules and absolutely obey the order of Jidokwan.
2. I will attain physical and mental discipline in the spirit of Jidokwan.
3. I will devote myself to the creation of new tradition and achievement of Jidokwan.

The Meaning of the Jidokwan Logo

The colors red and blue have significance to the meaning of the Ji Do Kwan symbol. Red is the color of energy and power, courage and attention. Blue is for peace, calm and friendship. Placed together they create balance and harmony.

The center figure is a representation of Bodhidarma, also known as Daruma or Tamo.

Japanese folk legend says, that around the fith century, the Dharma was a Buddhist priest. He sat facing a wall in meditation for nine years straight. When he finally try to move to stand up, his arms and legs were too stiff to stand upright. “Nothing can stop the teachings of the Buddha”, the Dharma thought to himself. I must move from village to village, sharing with the people what I have discovered while meditating. Since the Dharma could not stand up and walk, he rolled from village to village, spreading his teachings.

Darumas come in many sizes – from lifesize (and larger) to dolls no larger than a fingernail. They’re made of many materials and are the creations of many talented artists.

The traditional Daruma figure is a balanced figure that will not stay down if knocked over, it will right itself automatically, similar to the toy we know as Weebles, remember?: “Weebles wobble but they don’t fall down!”. This automatic righting is representative of the Buddhist saying “Seven times down, eight times up”. This is a common saying among early Jidokwan members. The Daruma has become symbolic for optimism, persistence, and strong determination. 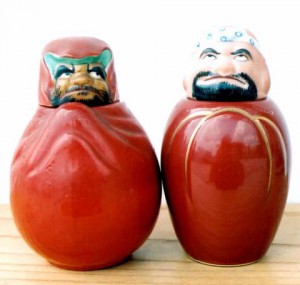 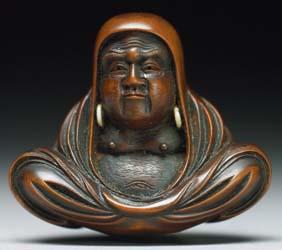 A Japanese children’s song about the Daruma doll goes as follows:

Once! twice!
Ever the red-hooded Daruma
Heedlessly sits up again!

The eight outer leaves of the Jidokwan logo 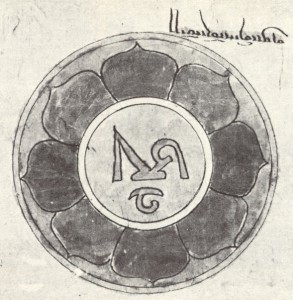 Each of the eight lotus leaves which surround the Otugi figure in the Jidokwan logo represents one of the Eight Solemn Ways defined below. This lotus symbol is many thousands of years old and traces back to early symbols found in Northern India. It was later adapted by Buddhist artisans and holds the meaning of the unfolding or enlightened mind. 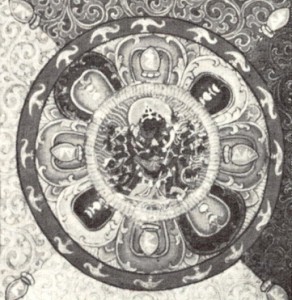 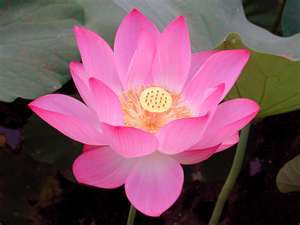 Tibetan 8 leaf Lotus diagram in center of tantric Mandala (same pattern as Jidokwan lotus), next to a Lotus flower, the inspiration for the symbol.

It also matches the Wheel of Life that represents the Buddha’s discourse at the river Benares in India where he spelled out the Four Noble Truths, of which the Eight Solemn Ways (aka Eight Fold Path) is the forth of those truths.

The Eight Fold Path has three categories and they are Ethical, Mental and Intellectual Discipline: 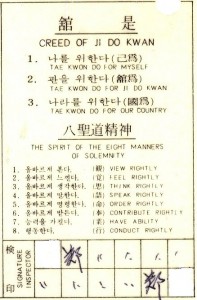