A Poomse is a pattern of pre-arranged Taekwondo moves, consisting of a combination of stances, blocks, strikes and kicks. The forms you will be learning and practicing, depend on what organization your Taekwondo Dojang belongs to. Taeguk forms are practiced by WTF schools like ours; an ITF school practices the 24 forms developed by General Choi; ATA schools practice forms designed by ATA’s Master Instructor and his colleagues in the 1970s. 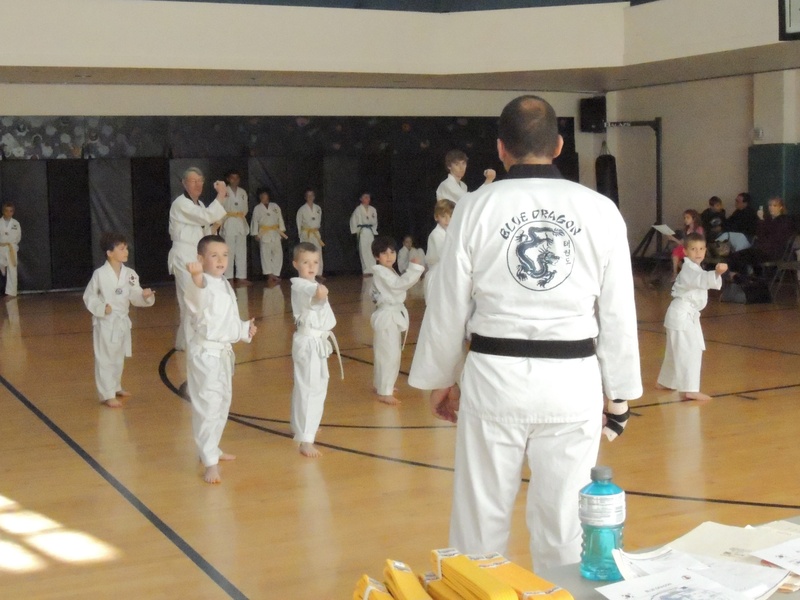 While performing a Poomse, the Taekwondo practitioner uses his/her techniques to fight off  imaginary opponents, attacking from multiple directions.  Each of the WTF forms  (Taegeuk 1-8), the traditional forms (Palgwe 1-8), and all the 9 Black Belt forms (from Koryo to Ilyo), begin with defensive blocking techniques that are followed by counter attacks.

Each Poomse is to  be practiced so many times that it can be performed without a thought (having to think of what the next move, direction or stance would be). Only after practicing a form, hundreds of times, will the student begin to understand its meaning.

Poomses originate from the book ‘I Ching’, a Chinese oracle. The I Ching has 64 hexagrams, a combination of two sets of three lines, closed or broken. The sets of three lines are called trigrams. The closed lines represent Yang, the open lines Yin. In the Chinese language, the unity of Yin and Yang is called ‘taichi’. In the Korean language, the unity is called Tae-guk. This explains the term Poomse Taegeuk. The eight trigrams together are called Pal-gwe as in Poomse Palgwe.

You might have noticed, while visiting other sites or by watching Poomse videos, that some of the motions, blocks and punches shown, are a little different than the ones we have learned in class. This is because there are 2 “types” of Poomse or forms according to the school: One, the oldest practiced, is called traditional form, and the second and “newest”, it’s called the standard form. At the Blue Dragon Taekwondo School, we study, learn and practice the traditional style of these forms, but for competitions, the standard forms should be performed

Taegeuk
Taegeuk, when loosely translated, means Great Eternity or Eternal Greatness. The idealisms of Taegeuk, which every student should learn are: pacifism, unity, creative spirit, future spirit, and eternity. The Taegeuk has the same symbolism as the Palgwe.  J. R. Kim (Taekwondo: Basic Techniques Taegeuk Poomse) says the “Taegeuk Poomse  integrates the methods of attack, defense, forward movement and retreat, control of the speed of movements, and the intensity of the actions. The directions and lines of movement are represented by the eight symbols of ‘Palgwe.’  The overall purpose of Poomse is to control the breathing to be synchronized while executing techniques requiring great speed.

Palgwe
The term Palgwe is loosely translated as Eight Powers of the Universe, and these eight Palgwe poomse are based on these conceptual powers of Heaven, Mind, Fire, Thunder, Wind, Water, Mountain, and Earth.  According to K. M. Lee (Tae Kwon Do: Techniques & Training, 1996), “The idea of Palgwe embraces different symbols and includes all opposing concepts and images.  They grow through the process of constant change…in an endless state of development.  These forms are meant to give the student an understanding of the basic principles of Taekwondo, which are characterized by contrast-change and coming together, conflict and harmony-thereby corresponding to the idea of Palgwe”.

Black Belt Forms
The color black is created when all the colors of the light spectrum have been absorbed into an object. That object has “taken control” of the colors and retained them. If one color was to “escape”, the object would no longer be black. The student has mastered the nine grades of Taekwondo. He/she has “absorbed” all the knowledge of the color ranks and has overcome or “mastered” those levels of training.

“The tree has reached maturity and overcome darkness.

It must now begin to plant seeds for the future.”