Taekwondo is one of the most systematic and scientific Korean traditional martial arts. It traces its roots back to early 600 AD tribal and royal court fighting systems. Some early precursors to Taekwondo were Soo Bahk, Tae Kyun, and Kwon Bup.

Modern Taekwondo started to emerge in the late 1940’s with the liberation of Korea from Japanese occupation. Many martial arts Masters had exiled themselves from Korea or gone underground during the occupation. When Korea was liberated, these Masters began teaching their arts openly again. Many had gone to China or Japan, and incorporated martial arts techniques from these countries into their systems. This gave the Korean martial arts a unique flavor and style. 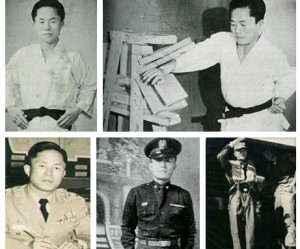 The early Do Jangs (training halls) were called Kwans. There were five major Kwans to develop in the late 1940’s early 1950’s. They were Moo Duk Kwan , Jidokwan, Chung Do Kwan, Chang Moo Kwan, and Song Moo Kwan. There were also several minor Kwans including Moo Sul Kwan, Yun Moo Kwan, Kang Duk Won, Han Moo Kwan, Oh Do Kwan (Korean Army) and Mun Moo Kwan (Korean Air Force). While the Kwans all practiced similar martial arts, there were philosophical and technical differences. In 1955 many of the Kwan leaders (called Kwan jang or directors), met under the direction of General Choi Hong Hi,and unified under the name Taekwondo. They formed the Korean Taekwondo Association and later the International Taekwondo Federation.