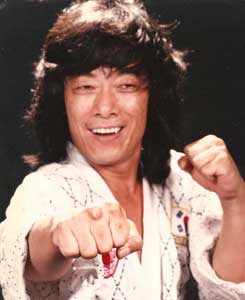 This site is dedicated to The Grand Master Young Soo Do. We will try to find facts about him and his amazing journey, and will post them here. We will also have more pictures and maybe links to other related sites. Grand Master Young Soo Do was a native of South Korea and began studying Taekwondo as a young child. He was a 9th degree Black Belt in Taekwondo and he is eligible to bear the title of Master Instructor or Kwanjang Nim. Grand Master Do served with the Korean Marine Corps in Viet Nam during the war. As a member of the 2nd ROK Marine Brigade known as “Blue Dragons” (where our school’s name comes from), in addition to major combat duty, he taught Taekwondo to American and Vietnamese soldiers. After the war, he returned to Korea as a Master Instructor in Taekwondo. In 1976, Grand Master Do came to the United States and opened Young Taekwondo Academy. He taught all his own classes six days a week. He was a superb instructor and was capable of teaching Taekwondo to all students from young children to mature adults. His life was totally devoted to Taekwondo and this dedication was imparted to his students.