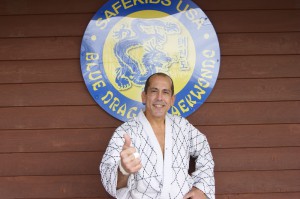 Marshall Hale was born and raised in Miami, Fl. Spending most of His time on the beach snorkeling, surfing, and SCUBA diving. He began working as a beach guard for Miami-Dade County at Bakers Haulover beach in 1980 and became a Lifeguard Lieutenant in 1983, working there for almost 20 years.

He started taking Taekwondo classes from THE greatest instructor, Grand Master Young Soo Do in 1981, at the Young Soo Do School of Taekwondo, where he achieved his first-degree black belt in 1983. He studied throughout the 1980s and competed with the Young Taekwondo fighting team, obtaining numerous first-place trophies for fighting, breaking, and forms competitions.

A particularly noteworthy stepping stone in his career as a martial artist occurred during Sa Bum Nim’s fourth-degree black belt test, when he achieved the impressive personal goal of breaking 12 cement bricks with a single punch.

Hale’s instructional background spans over three decades, throughout which he has taught numerous child and adult courses. One of his most recent teaching assignments prior to moving to North Carolina included teaching Taekwondo to inner-city youths as part of the North Miami Beach Kid-Safe program.

Hale has worked at the Haywood Regional Health and Fitness Center as a pool lifeguard and Facility Supervisor. He taught swimming lessons, life-guarding, CPR, and Water Safety Instruction. In the summer of 2008, he started a Taekwondo class for kids, and a few months later, an adult class, both with great success. In 2014, Hale opened his own school in Clyde.

I would like to take this opportunity to thank each one of you for your continued support to our class. I cannot tell you how much I appreciate your dedication, and how much I enjoy watching your person grow as martial artists.

The new year promises to be our best yet, as our first Black belt test candidates have the opportunity to achieve a transformational moment in their lives. I am very excited for you! It gives me great sense of pride to see your enthusiasm and at the same time, I am humbled.

We also have an original artwork “Blue Dragon” logo. This great crafted logo, was graciously donated to us by the talented local artist Josh Crawford. Josh works at the reception desk in the Fitness Center, so please thank him for his contribution.

Sometime during the beginning of the year, we will have a demo sparring contest with one of the local Taekwondo schools. Of course, I will let you know the details as they come, so stay tuned.

The Red-belts will have the opportunity to have a forms (Poomse) practice on selected Saturdays in the following months. However, I would invite Blue-belts/Green-belts to also take advantage of these, as you “will be there” next year!

I again, thank you from my heart, and I like to let you know how much I enjoy being your instructor. I will remain dedicated to you as long as He allows me to. Keup!