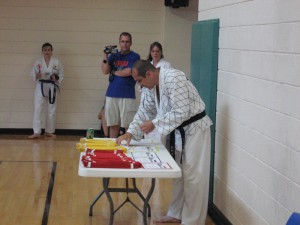 Grading is a physical examination that martial artists need to take to attain their next belts or grade.

Each grading starts with a warm-up, basic punching and kicking technique drills. It then moves onto patterns specific for each grade. The higher the grade, the more patterns or forms a student will have to display. The grading also includes free style sparring and set ‘one step’ sparring. These exercises allow the student to demonstrate a variety of techniques that are executed with control. Higher grades will also usually be required to break wooden boards in order to display the accuracy of their technique.

To move up from one belt to the next, students must demonstrate competency during a grading in front of a panel of judges or an instructor. Grading formats may vary between clubs, but generally include the display of patterns, which use various techniques and sequence, breaking boards or wood, which demonstrates the use of techniques with power and control, self-defense, and sparring to show the application and control of techniques. There may also be theory and questions on history and techniques. This demonstrates understanding of the art. At higher dan tests, a student may take a written test as well as taking the practical grading. 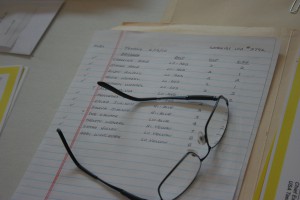 Promotion between Geups can be fast in some clubs, such as promotions every two, three, or four months. Basic techniques are developed first, more advanced techniques are introduced during the approach to first dan. Older and more traditional schools may take longer to gain grading than younger clubs.

However grading between dans may take years. The general rule is that a black belt may advance from one rank to the next only after the number of years equivalent to the current rank. For example, a second degree black belt may not progress to third degree until two years have passed. Some organizations also have junior black belt ranks for under 16 year olds rather than dan ranks.

The typical student needs between three and six months before moving up each Gup rank. The average student who trains two or three times per week could expect to have achieved green belt rank after one year, red belt after the second year and then black belt after more than three years of regular training. In reality many students can take up to five years to achieve their 1st dan black belt, but this depends on the individual.

After achieving black belt grade (1st dan), there are further grading up to ninth dan. Once the practitioner has passed sixth dan, they may be known as a master of Taekwondo.

During the student’s training as well as observing the creed, they should also follow the tenets of Taekwondo, never misuse Taekwondo, respect instructors, seniors and juniors, promote freedom, justice and a more peaceful world.