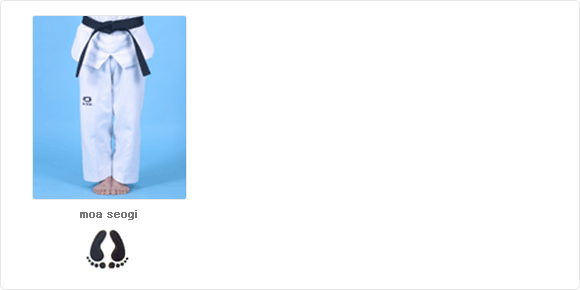 1. Pose:
From a moaseogi, the back soles are left attached to each other but the only fore soles are opened at an angle of 60 degrees.
2. Usage:
It is used in applicable action of seogi.

1. Pose:
From a moaseogi, the first toes of feet are left attached to each other, opening the back soles apart from each other at an angle of 60 degrees. This is the reverse stance of the dwichuk-moaseogi.
2. Usage:
Both apchuk moaseogi and dwichuk moaseogi are used to ready stances in a state of halt.

1. Pose:
2. Usage:
This stance is used to make one thrust forward like an onrush.

1. Pose:
In case of a righthand apkkoa seogi,
2. Usage:
This stance is mainly used move side-wards.

1. Pose:
The right foot thrusts forward pounding the ground and at the same time the left foot follows, placing its toes near the right foot blade to brake the movement. At this point, the right calf will strick to the left shin, making an “x” sign, and the two knees are also bent down.
2. Usage:
With this stance, you can pound on your opponent’s foot back, approaching nearer for a second attack.

1. Pose:
First, bend and lower your right knee as in the riding stance and then lift up your left foot so that the back of foot blade may be placed close to the inner side of right knee. In this stance, the lifted up left knee will be tightened to protrude forward. If the left knee opens outward, keeping balnace will be difficult, and the next motion for an attack will be dull.
2. Usage:
This stance help exercise the maintenance of balance and arouses confusion in the opponent because of your readiness to deliver kicks at any moment.

1. Pose:
The same as the crane stance except that the foot back of lifted up foot placed on the hollow of the other leg’s knee.
2. Usage:
Unlike the crane stance, this stance makes the supporting foot brake one’s forward thrust and the lifted up foot with its foot back placed on the hollow of knee helps keeping balance. This will enable one to give variations. in kick techniques, either front or sidekick.

While the preceding seogis dealt with the techniques of keeping balance by use of two legs in various forms, the special poom stances will be described by the comprehensive motion of arms, legs and the trunk which are to make harmonized stances. The “poom” means a pose resulting from the motion taken in applying a taekwondo technique.

1. Pose:
Keep the two feet as in the close stance, keep the body as in the attention stance, overlap the stretched right hand with the equally stretched left hand, crossing each other. The fingers are stretched closed with each other, tighten the two overlapping hands but with a gap between the two by a paper’s thickness, and other things, such as the body, eyes, condition of mind and respiration control, are the same as in the “basic ready stance.”
2. Usage:
This is used for a ready.
3. Words of command:
“Kyopson junbi!” but the last word “junbi” must be uttered loud.

1. Pose:
2. Usage:
This is used for a ready stance.
3. Words of command:
“Bojumeok junbi!” also stressing the last word “junbi.”

1. Pose:
2. Usage:
This is used for a ready stance.
3. Words of command:
“Tongmilgi junbi!”, the last word “junbi” being accentuated as an ordering word.