Taekwondo is known almost exclusively for its spectacular kicks and acrobatics, but there are many other self-defense techniques that are part of Taekwondo, and can be utilized effectively to fend off an adversary. Some examples are, joint locks sweeps and throws. The teaching of these techniques vary from school to school, and very few Dojangs include them in their regular curriculum, while others teach them exclusively to the higher ranking students or higher belts.

A throw in martial arts, is a term that defines a grappling technique that involves getting the opponent off balance, lifting and/or throwing him/her to the ground, often followed by a “finishing technique”. Some martial arts are well known for their grabs and throws, like Judo, Jujitsu and Tang So Do, but most styles have some kind of throwing technique in their repertoire.

Throws frequently involve a rotational motion, with the practitioner performing the throw disconnecting with the opponent, and ending balanced and on their feet, as opposed to a “takedown”, where both finish on the ground. Throws can also be followed into a top position, in which the person executing the throw does not disconnect from the opponent. Certain throwing techniques called sacrifice throws, and involve putting oneself in a potentially disadvantageous position, such as on the ground, in order to execute a throw. 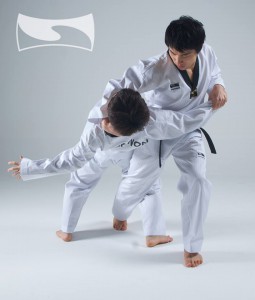 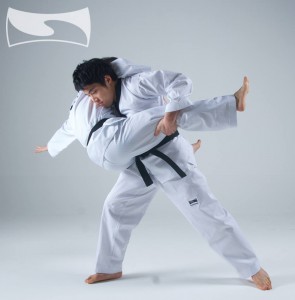 Most throws are named by describing the by-passing point of the throw (hip throw, shoulder throw, wrist throw etc.), or the nature of effect of the throw on the opponent (heaven and earth throw, valley drop, body drop, etc). Throws are divided into six categories: hand techniques, leg techniques, hip techniques, shoulder techniques, as well as sacrifice throws to the rear and side.

A shoulder throw involves throwing an opponent over the shoulder.

Similar to a leg reap, is the leg hook. This technique, involves hooking and lifting the attacking leg, instead of a reaping action. In a leg reap, the move is smooth, but in a hook, the opponents leg is pulled up first, and then swing away, tripping the opponent and making him fall.

A hip throw involves using the thrower’s hip as a pivot point, by placing the hip in a lower position than an opponent’s center of gravity. There are several types of hip throws such as O Goshi, which is often taught first to novices.

Sacrifice throws require the thrower to move into a potentially disadvantageous position in order to be executed, such as falling to the ground. The momentum of the falling body adds power to the throw and requires comparatively little strength, compared to the effect.

Pickups involve lifting the opponent off the ground and then bringing them down again.