Taekwondo is one of the most systematic and scientific Korean traditional martial arts. It traces its roots back to early 600 AD tribal and royal court fighting systems. Some early precursors to Taekwondo were Soo Bahk, Tae Kyun, and Kwon Bup.

Taekwondo teaches more than physical fighting skills. It is a discipline that shows ways of enhancing spirit and life through training our body and mind. Today, it has become a global sport that has gained international reputation, and stands among the official games represented in the Olympic Games.

Ancient Hwarang warriors painting. The Hwarangs or “flowering knights”, were an elite youth order of the Silla kingdom during the Three-Kingdoms Period, in what is now Korea. They were mostly from aristocratic families, who were educated in artistic, academic, and martial fields of study, were Taekwondo originated.

Let’s take a closer look at the meaning of the word Taekwondo. It is composed of three parts, as is frequently shown in the English spelling, though it is one word in Korean. “Tae” means “foot,” “leg,” or “to step on”; “Kwon” means “fist,” or “fight”; and “Do” means the “way” or “discipline.” If we put these three parts together, we can see two important concepts behind “Tae Kwon Do”.

First, Taekwondo is the right way of using Tae and Kwon ‘fist and feet, or all the parts of the body that are represented by fist and the feet. Second, it is a way to control or calm down fights and keep the peace. This concept comes from the meaning of Tae Kwon ‘to put fists under control’ (or ‘to step on fist’). Thus Taekwondo means: “the right way of using all parts of the body to stop fights, and help to build a better and more peaceful world.”

TAEKWONDO – “The Art of Kicking and Punching…for a better world!”

Modern Taekwondo started to emerge in the late 1940’s with the liberation of Korea from Japanese occupation. Many martial arts Masters had exiled themselves from Korea or gone underground during the occupation. When Korea was liberated, these Masters began teaching their arts openly again. Many had gone to China or Japan, and incorporated martial arts techniques from these countries into their systems. This gave the Korean martial arts a unique flavor and style. There are open and closed hand strikes and blocks, straight line and circular techniques, hard and soft techniques, holds and grappling techniques. Of course, there are the kicks, and some of this kicks are simply amazing!. Taekwondo is best know for its fantastic kicking style: Stationary, spinning, jumping and flying kicks, that come from all angles and all speeds. Almost all martial arts today have borrowed the Korean style of kicking and added them to their own.

The early Do Jangs (training halls) were called Kwans. There were five major Kwans to develop in the late 1940’s early 1950’s. They were Moo Duk Kwan , Jidokwan, Chung Do Kwan, Chang Moo Kwan, andSong Moo Kwan. There were also several minor Kwans including Moo Sul Kwan, Yun Moo Kwan, Kang Duk Won, Han Moo Kwan, Oh Do Kwan (Korean Army) and Mun Moo Kwan (Korean Air Force). While the Kwans all practiced similar martial arts, there were philosophical and technical differences. In 1955 many of the Kwan leaders (called Kwan jang or directors), met under the direction of General Choi Hong Hi,and unified under the name Taekwondo. They formed the Korean Taekwondo Association and later the International Taekwondo Federation. 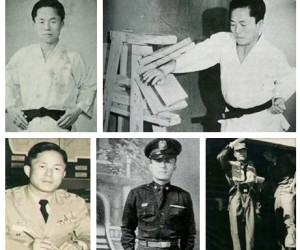 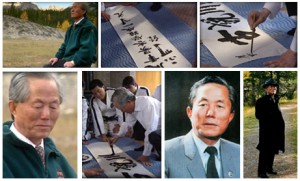 “Pain is the best instructor, but no one wants to go to his class.”

“The utmost purpose of Taekwondo is to eliminate fighting by discouraging the stronger’s oppression of the weaker with a power that must be based on humanity, justice, morality, wisdom, and faith, thus helping to build a better and more peaceful world.“

Taekwondo has something to offer to everyone. There are forms or Poomses (choreographed patterns), self defense, grappling and holds, hand techniques, breaks, and of course awesome kicking techniques. Taekwondo is for the young and not so young, the competitor, the fitness buff, the person looking for self defense, the parent looking for a good disciplined environment, and especially, for the family looking for a great group activity to participate, they all can find something in Taekwondo.

For more information, you can search Taekwondo on the web, but be prepared for thousands of hits, since Taekwondo is America’s most popular martial art.