The color of the belt is an indication of the skill level of a Taekwondo student. Sometimes belts can be gained by winning competitions, but the common way is by completing an exam.

The different belt colors signify rank, skill and to some extent, time in training. Much like being called a freshman, sophomore, Jr. or Sr. It merely represents where you are at the moment. The belt system is also a way to break the larger goal of Black Belt into smaller, short-term goals so that students can gauge their progress.

Blue Dragon Taekwondo, follows the World Taekwondo Federation (WTF) guidelines, and like them, awards belt ranks low and high for each color belt, except for white, in the following order: 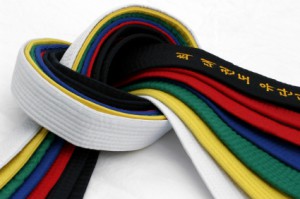 Have you ever heard the expression Geup (or Gup, or Kup) grade?

A Taekwondo student wearing a white belt is a 9th Geup student, and a student one grade away from black belt is a 1st Geup.

A student wearing a Taekwondo black belt is known as a Dan grade and in some schools, a Poome grade if they are under 16.

In  the WTF, there are 9 Geups, starting from the 9th Geup (white belt) and ends with the 1st Geup (red-black belt). The term “Geup” means degree. The term “Dan” means phase. There are 9 Dan degrees, starting with the first and ending with the 9th. All Dan-degrees are represented by a black belt.

There are two additional “levels” of Yellow through Red Belt: low-ranking and high-ranking. Two months between testings, working out 2 – 3 days per week, allows most students to progress smoothly.

It takes the average student 90 – 120 hours, spread out over 15 -18 months of in-class training under the supervision of a Certified Instructor to achieve the rank of Red Belt. At this point, self-defense should be automatic and instinctive. After Red Belt it takes 9 -14 months or even longer, to earn the rank of Black Belt.

Our school does not have “junior” black belts. If a student has successfully completed the Black Belt testing requirements, he or she is a Black Belt regardless of age.

Other organizations and schools may use different colors, more colors, or fewer colors. There is no great significance to this.

Did you know that originally there was only one color of belt?

In the beginnings of the art, a student would received a white belt only, he or she, would never wash this belt! Through years of training, the white belt would become soiled with dirt, grime and blood becoming darker and hence a black belt. 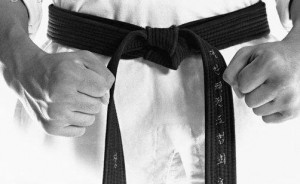 Most people believe black belt  is the pinnacle or the end . Not True! There are actually 10 levels or degrees of black belt, and so much more learning to do. No living person reaches beyond 9th degree. The 10th degree is a posthumous award, or an award that is given after the recipient’s death.

What do the colors mean?

Everyone starts out as a Taekwondo white belt. Even your instructor was a white belt once!

You don’t usually have to do a test to get a white belt. It is part of your first Taekwondo uniform or Dobok.

To see specific information about each belt, click on the belt image.