The philtrum (base of nose) is the typical target point in the face for jireugi.

The solar plexus is the typical point of attack in the trunk.

Target plus the method of jireugi makes the denomination of poom (or jireugi technique).

One delivers a jireugi to his or her side.

A jireugi of punching down.

The fist does not stretch straight as it is but half spirals before reaching the target from the waist. This is used when the opponent is closer and the elbow bend a little.

Usually a punch is delivered to the opponent’s jaw by the fist thrusting straightly upward from the waist, in which the back of fist faces the opponent, the elbow slightly bending.

As mentioned above, jireugi are differentiated by their classification according to the means of punching, targets and directions, which combined together define the terms,i.e., the completed movements of jireugi as well as the names of pooms. 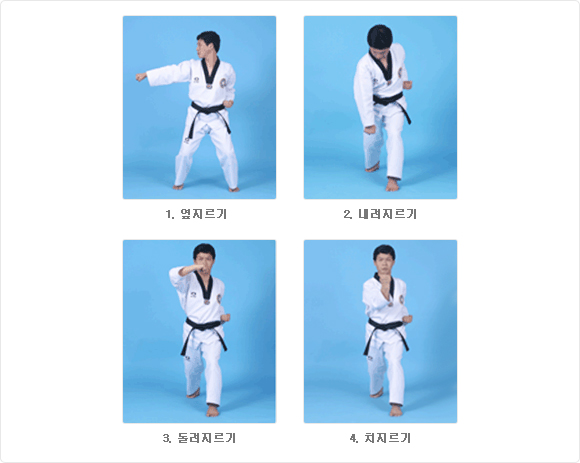 So far we have seen the standard forms of jireugi, but there are applied to techniques of jireugi with the specific terms.

(Point of attention)
The same as the face-jireugi.

(Point of attention)
The same as the face-jireugi.

(Point of attention)
The same as the momtongjireugi.

(Point of attention)
The same as the momtongjireugi.

A side-jireugi is executed when the two feet’s tips are directed toward the front as in a juchumseogi stance.

(Point of attention)
The fist on the other side which was crossing the trunk is pulled and at the same time, the punching fist makes a side jireugi.

There is no need of mentioning “arae” (lower part) because the “naeryo jireugi” is itself related with and underneath target.

The elbow may be fully stretched when the sewojireugi is targeted on face of underneath, but it is better to keep the elbow slightly bent in case of momtong sewojireugi.

A dollyojireugi is not applied to underneath targets.

A chijireugi aims uniquely at the jaw; therefore, there is no need of mentioning the target in the term.

Bandae jeocho jireugijeocho jireugi: both fists with their backs downward are used in a jeocho jireugi. At the time of performing a jeocho jireugi, the trunk and there will be a gap of a fist’s width between the two fists As mentioned above, because of all of the jireugi is not need to emphasized as a “jireugi” as the movement using the fists. As well as the names of pooms are using simple words with full of meanigs.Next, the expression of the pooms and the part of the body when you are using the jireugi, the fists changed like a pyon-jumoek, a sosumjumoek, and a jipkejumoek.

The other types of fist, such as sosumjumeok, and jipkejumeok, can be equally applicable to the above in naming the terms. However, the sosumjumeok can not make any sewojireugi because it is itself pointed, while the jipkejumeok is used only for a limited target, I. E., the uvula.

All the above mentioned jireugi are principally perfomed by one fist. Now the combined use of both arms, which is called a special jireugi will be described in the following:

Two fists are simultaneously bent backward to make jireugi; so, there are no ways of either a barojireugi or a bandaejireugi.

Two sosumjumeok execute a chi jireugi to punch the two side of jaw.

Either one of the hands will be set as a target to be punched by the other hand’s fist.

One fist punches the opponent’s face and the other the trunk at the same time, making the two arms shape the form of “u”letter lying down laterally.

(Point of attention)
The dujumeok-heori(two fists at the waist) ready stance is transformed into a seogi-stance so that a jireugi may be made.

A jireugi can also be made in a small doltzeogi stance.

The two fists punch the opponent’s trunk equally. Two arms shaping the form of “u” letter horizontally. In fact, the left fist makes a momtong-bandaejireugi, when the left foot is placed forwad, while the right fist a momtong-barojireugi in the same stance. At that time, the left shoulder turns forward by 45 degrees and the right elbow is slightly bent, the fist closer to the left forearm by a fist’s width.

One elbow hits backward while the other arm’s fist punches the face target by turning in the same direction as the other elbow.

(Point of attention)
In a juchumseogi and a small doltzeogi stance, the punching arm is thrown over the shoulder bending the elbow by twisting the waist to the maximum so that its elbow may deliver a punching at the stomach-pit, keeping the wrist stuck to the waist afterwards, while the fist of the other hand delivers a jireugi toward the face.

Pulling the opponent’s jaw by the left fist, one delivers a chijireugi at the jaw at the same time with the right fist, the left fist coming to the front of attacker’s right shoulder.

(Point of attention)
The fist-back is directed toward the body and the punching arm is bent to be stuck to the body at the height of the chest while a jireugi is delivered, in the course of which the punching fist is bent just before reaching the target. The other arm to be pulled crosses with the punching fist in the front of the chest, and as soon as it reaches the front of the shoulder the fist is bent backward. Jireugi and pulling are made simultaneously.

One arm executes an olgulmakki(face defense) while the other arm’s fist punches the opponent’s face. The direction of the two actions are the same.

(Point of attention)
A small doltzeogi is formed toward the waist on the side of the arm delivering a momtongjireugi, and then a keumgang apjireugi is delivered at the same time as an apkubi stance is formed by making a step forward. However, a small doltzeogi may be ommitted according to the position of the hand.

One arm carries out a face defense while the orther arm’s fist does a momtong yopjireugi. The lower part the body makes juchumseogi and the direction of the two arms is different from each other.

(Point of attention)
A small doltzeogi is formulated at the waist on the side fo the momtongjireugi arm in a juchum-seogi stance, before an olgulmakki and a yop-jireugi are made.

One stretches out both fists at the same time, making the body in the form of a cross. The whole body will be tensed by concentration of force and the punches will be delivered relatively slowly as if pulling.